The Facebook pages are being redesigned. The social network today announced a significant change in the Facebook page experience for creators and public figures, which includes a new look, updated navigation, the introduction of a dedicated news feed , a new question-and-answer format for engaging fans, and other tools. and ideas. Notably, the redesign will also remove the “Like” button to focus on subscribers instead – a more direct measure of how many people a page is currently reaching.

TechCrunch first reported on the company’s plans to revamp Facebook Pages last summer, when it began testing the updated look with a number of prominent people, including actors, authors and creators, followed by professional pages in English.

Today, Facebook says the new experience will officially begin rolling out to all Facebook Pages over the coming months.

One of the most important changes to the new Page design is that it removes “likes”. This happened because likes distorted the true popularity of a page. Many Facebook users had already “liked” a page, but then stopped following the page to remove its updates from their News Feed as they exceeded their interest. Or they had “liked” a page as a favor to a friend after receiving a request, but declined to receive its updates.

Facebook now says that a Page’s subscribers will be the leading metric for the new experience, as it’s a better indication of how many people who are fans are receiving updates from the page.

Another notable change is that the pages will have their own news feed. This means the Page itself can participate in conversations as a public figure or brand, follow trends, and engage with its fans. This dedicated news feed will also suggest other public figures, Pages, Groups and trending content with which the Page or public figure can interact.

When you follow a page, you’ll see their comments on other people’s posts move up to the top of the comments section, giving them better visibility, along with a more visible blue check mark that indicates the page is verified. Posts they have commented on may also be more visible in user newsfeeds.

Others will be able to follow the Pages directly from the comments and recommendations posts, according to Facebook.

Facebook is also introducing a new question-and-answer format that allows Pages to better engage with fans. This is somewhat inspired by the Instagram trend, where creators would answer questions from fans and answer them in stories. In this case, however, subscribers can ask questions to the page about a topic and when the page responds those become a stack of questions that people can go through to learn more. This could be especially useful for businesses that want to answer common questions in a fun way for fans to get to know a designer they love, among other things. 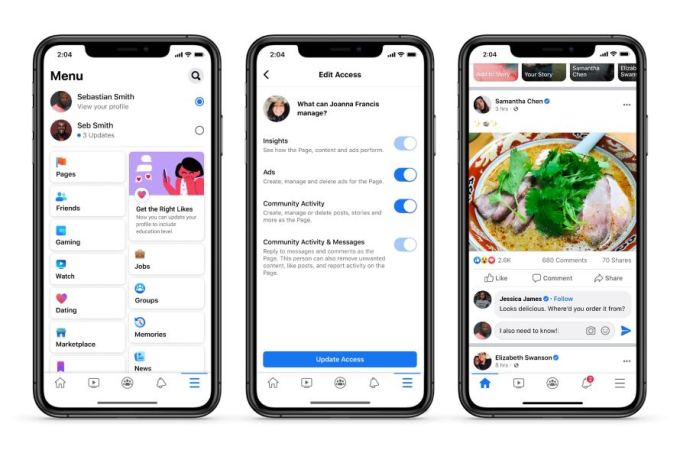 In addition to these few major changes, there are a few updates on the backend that are aimed at those who manage Facebook Pages. For example, page admins will be able to assign access permissions in a more granular way, to focus on granting people of different levels of access to perform specific tasks on news, ads, content, l community activity and messages.

Based on the feedback received by Facebook during the testing phase, it created a set of new admin tool interfaces that now has a direct entry point for managing permissions, adding new administrators and access to information for page administrators. This is available from the “manage” button on the page. It also launched full support for the Creator Studio mobile app.

Moderation is also improved, according to Facebook, as it updated its ability to detect and filter “hateful comments, violent, sexual, spam, impersonator accounts and phishing.” Further improvements in this area are still underway, Facebook notes, but declined to provide details when asked for details.

Since launching the test, Facebook has heard from users that they appreciate the new, more streamlined user interface, the ease of switching between their public and private profiles and pages, and the best ways to engage fans.

Facebook says the updated pages will be rolled out in the â€œnext few monthsâ€.